Thomas and Amy Kay came to their farm in Swanson from Ellerslie in June 1916. Their property was on Main Road, (now known as Waitakere Road). In later years Kay Road was named after them, but in those days was referred to as “the back road”.

Weather conditions were far from idyllic when they moved, the horses and wagons were unable to get up muddy Waikumete Hill, so much of their furniture, including Mrs Kay’s much loved piano, was left on the roadside till the following day.

Thomas Kay farmed the 50 acre property, with his son Alan, until his death in 1926.

Haymaking was a memorable experience. Local farmers, the Mettam Brothers, Charlie Crowe and Noel Green would share the task of building the haystack. There was no baled hay or haylage (round bales in plastic) in those days.

Noel Green’s two magnificent Clydesdales were especially popular with the Kay children who loved riding on these gentle giants.

Alan’s wife Margaret Kay slaved over a coal range cooking a hot dinner for the workers, which was then carried over the paddocks. The dinner was finished off with strong billy tea.

In the long hot summers, creek water was carried up for baths and for washing clothes in the old copper. In those days there were no giardia worries.

Third and fourth generations of Thomas and Amy still live on the original farm and the old house. Over the years each generation has been active in leadership roles in both scouting and guiding.

Thomas Kay was one of the original settlers who proposed the building of the Anglican Church — St Marks in Swanson. Succeeding generations have continued to be actively involved in the little church.

0.23 km
Nicholas and Ellen McGrath left their home in Tipperary, Ireland, to migrate to New Zealand aboard the Brodick Castle, a magnificent iron clipper ship of 1775 tons. She was on her maiden voyage when she sailed from London on 7 October 1875 for Auckland. On arrival in Auckland, the McGrath family lived in Parnell for 10 years before moving to Read more...

0.7 km
Of John and Lavinia Mettam’s 12 children, six were born in Swanson. John’s father and brothers helped build a house on a 41 acre block (which Tram Valley Road and the railway now cut through). The land was issued to John Tunnard Mettam in September 1886, for an annual rent of 12 3s Od, under the Village Settlement Scheme. John Read more...

0.82 km
Olaf Petersen was born in 1915 and lived all his life in Swanson. He was always very modest about his achievements, which included the Maadi Cup, awarded by the Photographic Society for the best photo of the year. Entitled “So Lonely” it was a haunting picture of a pied oystercatcher on sand dunes. Most of his successful shots have been Read more... 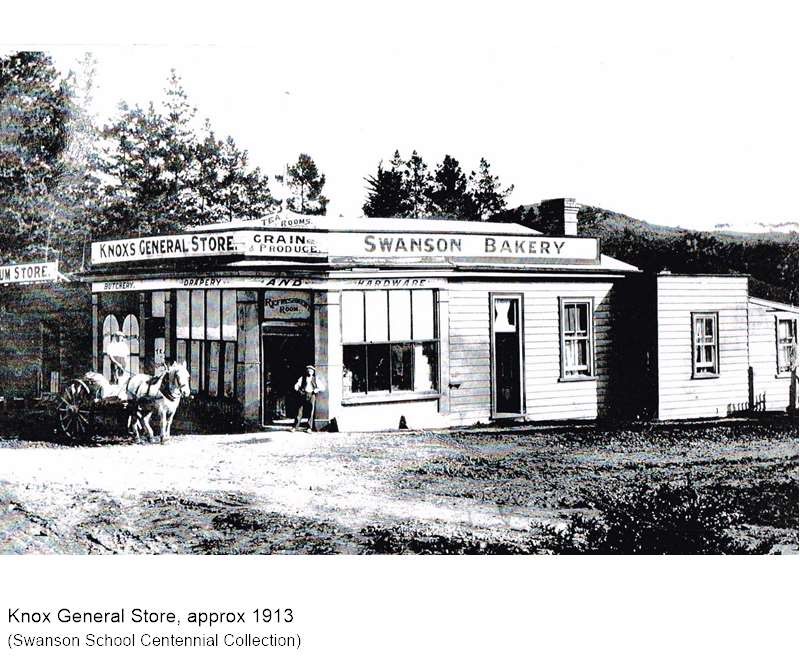 0.88 km
The Knox Memorial Park is named after the Knox family who ran a general store on the opposite corner for over 50 years. Robert Knox had brought the business from James Patterson Sinclair who had set it up in about 1886. In January 1889 James Sinclair added a bakery and confectionary. The district’s bread was previously brought by train from Read more...

1.06 km
‘Honest Willie Swanson’ tried his hand at many things and perhaps his proudest achievement, although now largely forgotten, was his contribution to writing the revolutionary Education Act of 1877. In the name of that far-sighted Act of Parliament, New Zealand led the world with education that was “free, secular and compulsory”. It even paved the way for women and Maori Read more...

1.27 km
Anthony Petrie arrived in New Zealand in 1900, and changed his name from Petrich into Petrie because his wife’s family didn’t want her to marry a “foreigner”. He named the roads in the locality – Awhiorangi Promenade, Rangimarie, Puketahu, Kitewaho — after much research on his part. A sawmill was built in 1949 along Awhiorangi Promenade from working parts sourced Read more...