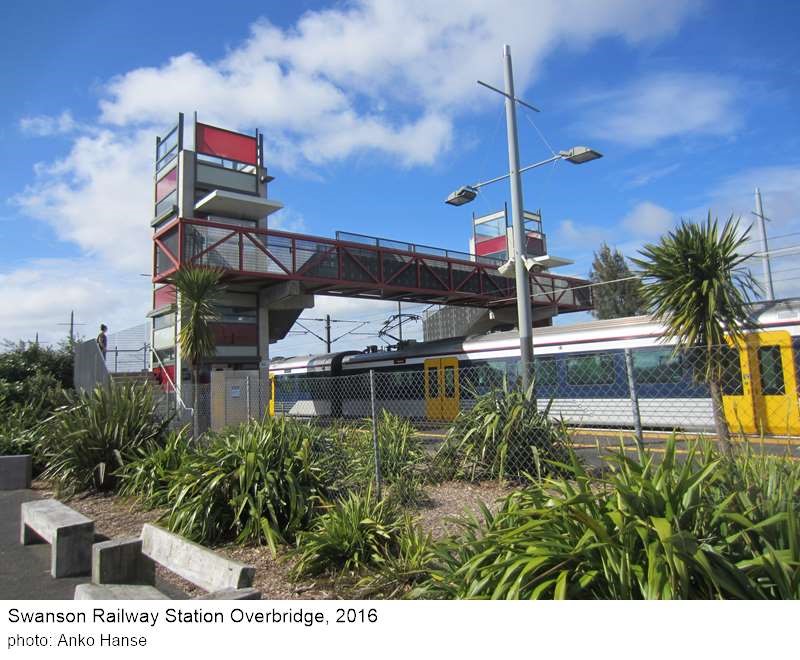 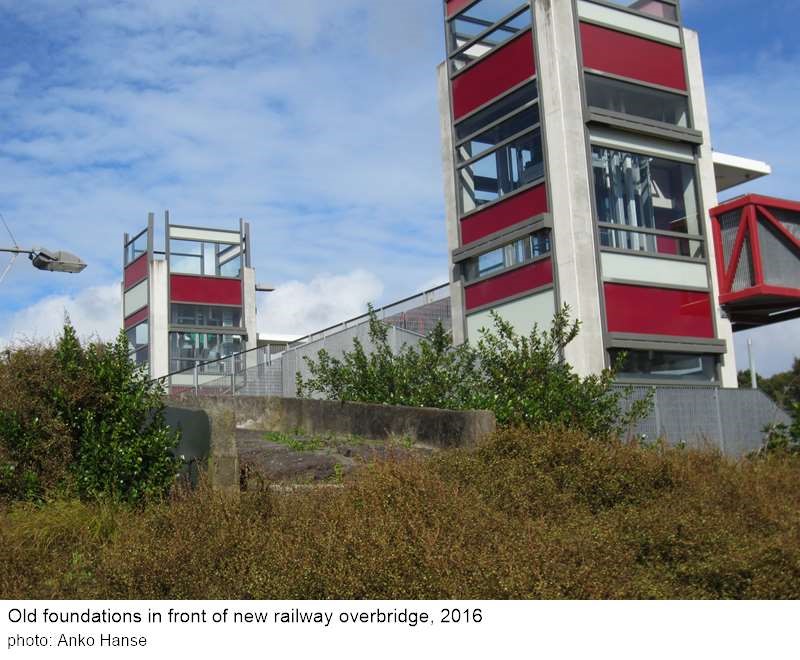 A rail route north from Auckland to link up with the Riverhead-Helensville line was identified in 1874, to run from Newmarket to Glen Eden, later to be extended to Riverhead.

Residents of the neglected areas of Henderson and surrounding country districts, were disappointed and angry that the railway was not coming through. Protest meetings, letters to the press and petitions to the Crown were organised. Timber and agricultural resources needed to be transported, but the line was to be built across the barren waste of Te Atatu peninsula, which supported only a few brickmakers.

The Newmarket to Glen Eden line was well under way during 1878-1879 when continued protests caused the administration to call two tenders for the link north. One was the proposed coastal route (via Te Atatu peninsula) and the other to go inland via Henderson and along Swanson valley to Kumeu. Much to the government’s surprise the inland route was cheaper.

The line was opened for business to Henderson on 21 December 1880, with an extension of the existing timetables, but it was not until 18 July 1881 that the link was finally completed with the Kaipara Railway at Kumeu.

By 1882 three trains ran each way daily between Auckland and Kumeu, with the middle train running through to Helensville on Monday, Wednesday and Friday. By the 1890s all trains were travelling to and from Helensville.

Trains were “mixed” – goods trains with passenger accommodation carriages at the rear; freighting of goods took precedence over passengers. Carriages were small, spartan four and six-wheelers. First class apartments boasted horsehair cushions on the seats and coir mats on the floors. Second-class passengers sat on wooden seats. Smokers were expected to stand out in the cold on the carriage platform. Lighting was by means of colza oil lamps.

The convenience of rail travel far outweighed discomfort for settlers and tourists using Swanson as the point of departure for their excursions into the Waitakere Ranges. In 1886 an eye-witness account recalls primitive facilities:

Owing to the extreme shortness of the landing stage at Swanson Station, an old lady (nearly) tumbled six feet into the gutter, but for the timely intervention of some bystanders. Several times I have witnessed the predicament of travellers having to jump, either into a ditch or attempt the slope of a slippery bank… Swanson railway station was poor and shabby… no accommodation by way of a urinal… a disgrace.

In late 1886 Swanson residents organized a petition to improve the station. The following year

Instead of the woebegone, dirty, comfortless shed, there is a nice waiting-room attached to the old station, well floored and painted, and fitted with a water tank and other conveniences. Last, but not least, the platform is lengthened out – a boon for passengers on a dart wet night – many of whom have lively remembrances of the precipitous descent into the wet water tables…

the fare to Henderson was eight pence, second class, for a little over three miles… simply extortion, not encouragement.

With the timber industry continuing in the ranges, Swanson was a busy depot. In 1893, there was a report of between two and three hundred thousand feet of kauri ready to be deported to Swanson station from the perpetual leasehold of F.Mosig.

The question of a workingman’s train was mooted around 1897 as the land was being divided into smaller sections for homes. A petition was presented to Parliament, but it was not until 1902 that a suburban workingman’s train linked Henderson and Auckland. Swanson workers had to wait longer. A petition in 1899 calling for a cattle and sheep loading pen was successful.

Besides the transportation of timber, there was agricultural produce including fruit crops from local orchards bound for the Auckland markets. As more people found work in the city, extensions were made (1910) to the station platform and siding to accommodate passenger trains.

“Gum Digger’s Specials” were a feature of the line for many years in the early 1900s until thegum market was exhausted and prices tumbled. There were regular Sunday excursions to Helensville’s hot pools and races, and train-loads of picnickers visited the popular Swanson Park and Recreation Grounds facilities (now Redwood Park golf course).

In 1915 work began on a foot bridge but the community was divided over which end of the yard they wanted it built. After public meetings, petition and counter petitions to the railway authorities, the bridge was erected on the eastern side. In June 1916 a new 42ft station was built with an open fireplace, an office, a closed-in lobby with seating and a ladies’ waiting room with a lavatory. “At places like Swanson”, a verandah was not provided, as it was considered a luxury.

A goods shed was erected in 1919, but petitions for a verandah were ignored. A verandah was not added until November 1924 when the shed was enlarged, but only after a deputation of ratepayers met the Minister of Railways. The heyday of railway passengers was in reality over by the end of the 1920s. Motor busses took over while the railway struggled to maintain patronage.

As no goods traffic was handled from August 1970, Swanson’s signal box, one of the tallest of the line, was sold, the building ending up as a home on Anawhata Road. Swanson Station remained open to passenger traffic only from April 1972. Five railway houses on the southern side were removed when their service occupancy was up and the footbridge was dismantled, as was the sidings relay shelter to serve the level crossing alarms. By 1974 the goods shed was sold for $80 for removal, the signals removed from each end of the yard, the station building demolished and the site cleared.

The station became the terminus of the Western Line in July 2015, when urban train services to Waitakere station ceased; that section of track was not electrified. A bus shuttle service operates between Waitakere and Swanson stations. Other passengers use the Park and Ride facilities that opened at that same time.

Swanson station is now both the westernmost and northernmost point of the electrified network. 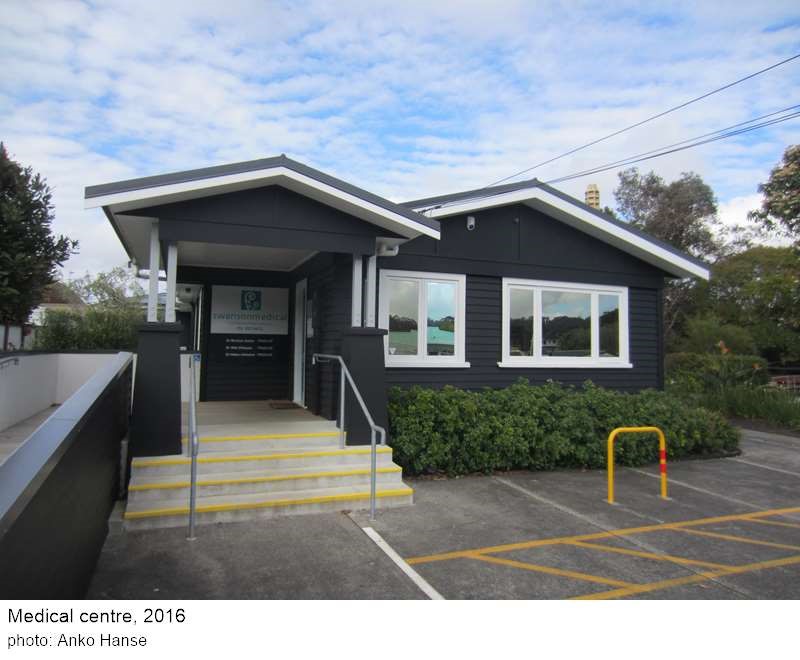 0.22 km
In the early decades of the century Swanson residents had to travel to Avondale or to Henderson to see a doctor. From about 1948, Dr Tom Childs of Henderson was the principal doctor for the district. He visited the village for a couple of afternoons every week, seeing patients in the hall (where the RSA is now). In 1956, Dr Read more... 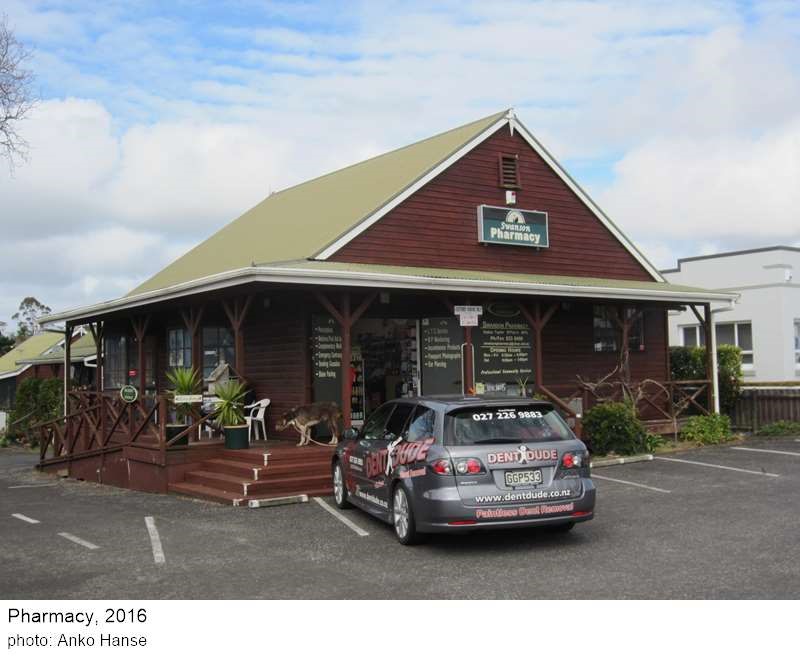 0.28 km
In November 1977 Margaret Saunders set up her first pharmacy business in the village on a site opposite the Ponderosa. At that time Swanson was still very much a rural community with no local doctor. After a long fight with the then Waitemata County Council, Margaret moved the pharmacy to its present location at 708 Swanson Road. It had to Read more... 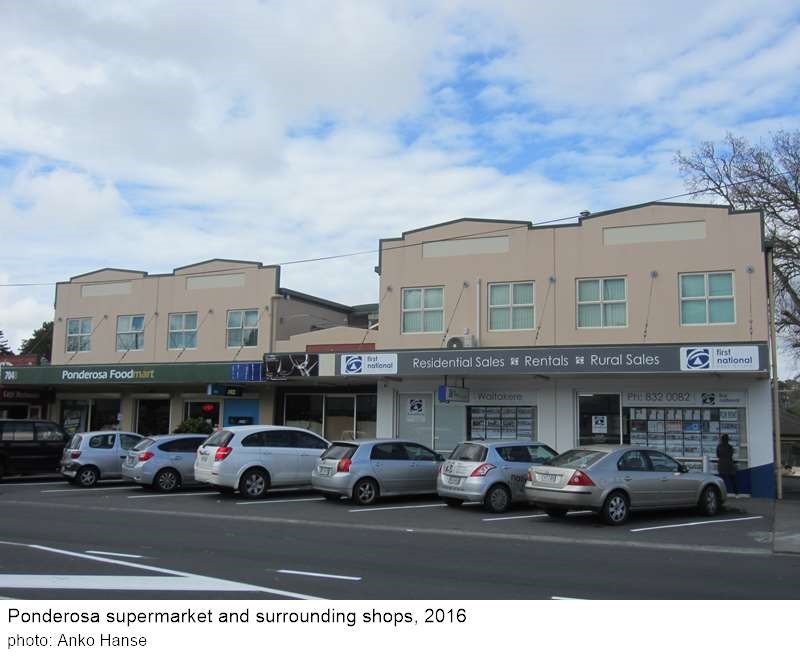 0.31 km
The first building on this site comprised a dwelling, store, post and telephone bureau. It was erected by Arney Robertson in early 1911 but sold to Charles Foley in July that year. Post-Office records show the store being taken over by Mr Sugden in 1915. Ted Guy worked as a delivery boy for a short time, driving a horse and Read more... 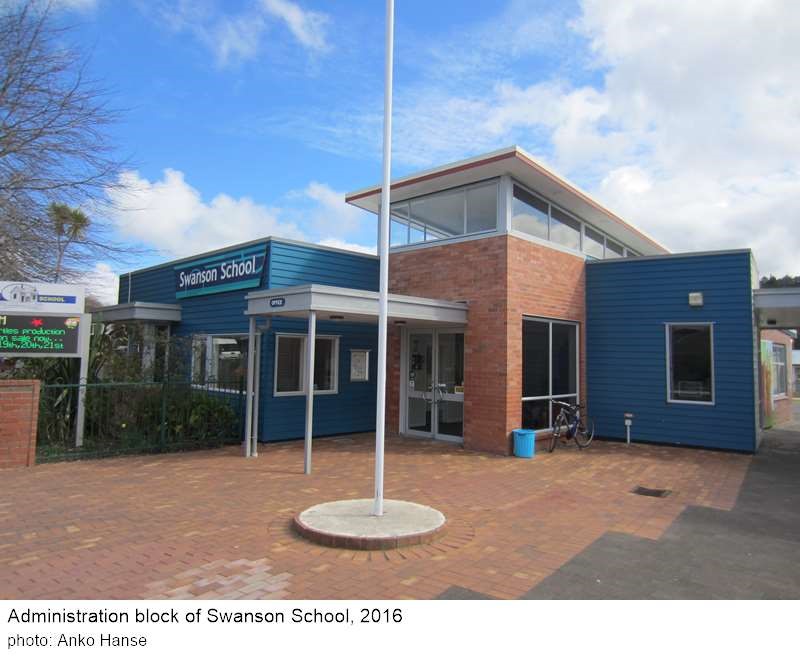 0.39 km
Early Days A large proportion of settlers’ children did not receive an education until a school was erected in 1888. There were a few children scattered around the district and some took the train to attend school at Woodhill from 1882 to 1888. With the arrival of the village settlers from 1885 onwards, parents from the 19-20 families lobbied the Read more... 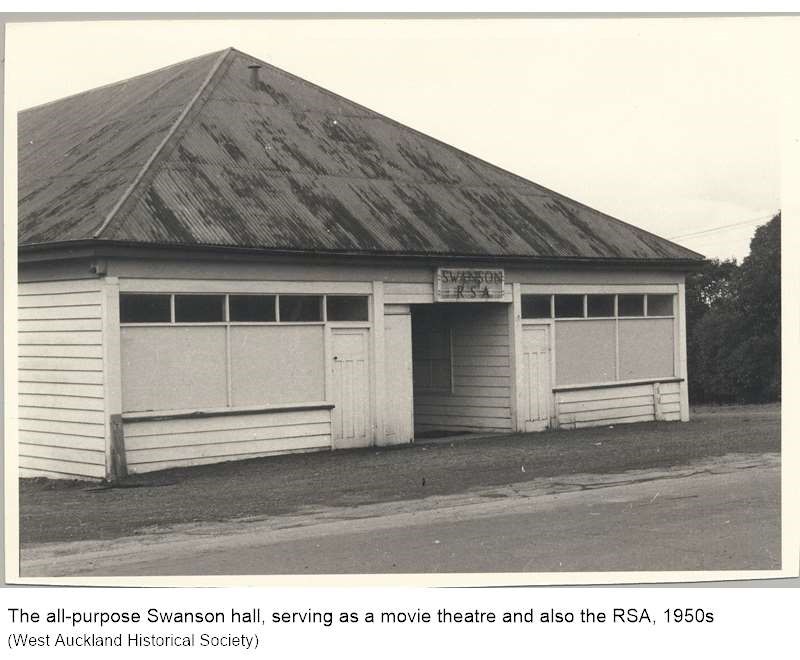 0.8 km
In 1932, the viscious effects of the Great Depression were being felt and the need to provide welfare in those grim times was a powerful motive to form a Returned Services Association in the west. In the past a man or family needing a few shillings in hard times had to travel to the RSA in Auckland and in many Read more... 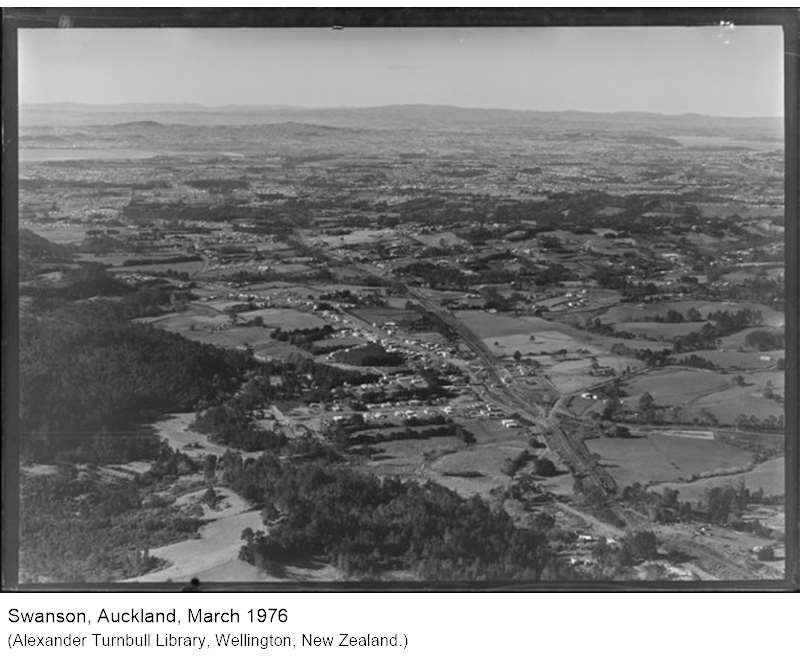 1.08 km
With the rise of newer and heavier locomotives and consequent increase in tonnage of goods transportation, the gradient to reach the Waitakere Tunnel was proving to be a hindrance as early as the 1920s. Trains leaving Swanson would drop down to the old timber-piled bridge and then had to climb steeply to reach the tunnel. Work on the grade easement Read more...